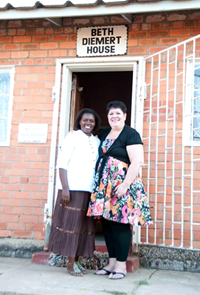 In the 1990’s, God placed a seed of desire in the heart of Barbra Mwansa, a young pastor’s wife in Kitwe, Zambia, to help women in her area who were choosing abortion. Her sister had died after attempting a “traditional” herbal abortion, and abortion was claiming the lives of many women and children in her country. Through God’s leading, Barbra and her husband, Pastor Edward, founded a pregnancy help center to answer the desperate need around them.

Feeling unprepared and unequipped to fulfill the vision, Barbra came to the 1999 Heartbeat International conference and was given the help she needed to move forward with her mission. Beth Diemert, Heartbeat VP at that time, provided additional in-depth training. Beth saw the deep passion and gifting God had given Barbra and told her, “You can do this!” Later, the Mwansa’s would honor Beth by naming the pregnancy center in Kitwe the Beth Diemert House.

Their ministry, called Silent Voices, faced staggering obstacles. At first, Barbra walked two hours to and from her center (with her baby on her back) in order to provide counseling. But God blessed their work.

Now, the Mwansas are sowing seed by founding pregnancy help centers throughout the area and training over 40 centers in Zambia, Zimbabwe, Namibia, Ghana, and Ethiopia. They also founded and oversee an orphanage, pre-school, boy’s ranch, maternity home, and feeding program for street babies and children.

In April, Heartbeat’s VP of Ministry Services, Jor-El Godsey, joined Barbra and Edward in Zambia to help train pregnancy ministry leaders at a regional Pan-African conference (modeled after Heartbeat conferences where the Mwansa’s have received their own training).

Another seed was planted about the same time in the heat of Lily Perez in the Philippines.

Lily received training at her first Heartbeat conference in 2001, and continued that training when Heartbeat President Peggy Hartshorn, traveled to 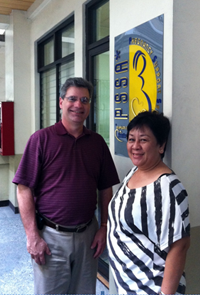 Manila in 2001 and 2006. After attending Heartbeat’s annual conference in 2004, Lily was inspired to create Pregnancy Support Services for Asia (PSSA), to start and support pro-life pregnancy centers throughout Asia. Over the last ten years she has planted a pregnancy help center in Manila and helped others to start and grow.

Earlier in the year, Jor-El traveled to the Philippines and was blessed to participate in training leaders at the First Regional Training and Conference hosted by our joint affiliation partner organization, (PSSA).  PSSA’s February conference provided training to more than 130 attendees from across the Philippines and four other Asian countries.

These two seeds bore bountiful fruit that impacted their communities and regions. God continues to give Heartbeat opportunities to train new leaders around the world. Imagine the harvest He will bring in the years ahead!