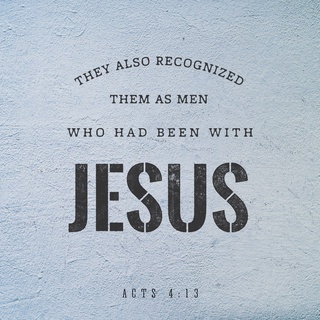 “Now as they observed the confidence of Peter and John, and understood that they were uneducated and untrained men, they were marveling, and began to recognize them as having been with Jesus.”
Acts 4:13

Early in Luke’s narrative of the Acts of the Apostles, we find the Sadducees had a problem. A fisherman named Peter stepped out and spoke to the people (Acts 2) and a stunning 3,000 people chose to be baptized in the name of a man named Jesus.

Just after this, Peter and John—these two average guys from Galilee—healed a man lame since birth (Acts 3). And, after Peter told the people how the man was healed, another 5,000 (and this is only counting the men!) latched on to this new movement.

For the Jewish leader leadership, this was a huge problem. Their hold on the people was disintegrating in front of their eyes. Thousands were walking away from them to follow a man Peter and his friends claimed God raised from the dead.

If the religious leaders didn’t do something—and soon—their entire power base would erode in weeks.

But what was the Sadducees’ biggest obstacle to stopping Peter, John and the others? It wasn’t the apostle’s education; the Sadducees were far more educated. Nor were the apostles trained well in Jewish law, traditions or the rites of the priesthood. Fact is, they didn’t know how to out-religious the religious leadership. They couldn’t sway anyone by claiming more knowledge or understanding.

Yet, the people marveled because this rag-tag group of apostles carried with them one characteristic which separated them from all opposition: They had been with Jesus.

What about us? If we want to reach a hurting world, knowledge has its value. Paul had knowledge and used his education to influence many, and even implores his protégé, Timothy, to “handle accurately the word of truth,” which implies educating ourselves (II Tim. 2:15).

Ultimately however, our greatest influence comes when others see we’ve been with Jesus. But let’s be real. This task is difficult in this crazy, social-media filled, informationally overloaded, busier than ever world.

We must take the time to stop, reset our minds and rest in Jesus Christ, or we will become just another voice in the noise of the culture.

As we go about our day, at some point let’s ask ourselves one question: “What is one thing I can do to be with Jesus?”

Our answers may vary, depending on our personalities. But each of us has an answer which is best for us. Once we receive our answer, let’s do that one thing—so that others may know, “This person has been with Jesus.”