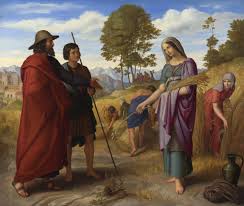 And to Ram was born Amminadab; and to Amminadab, Nahshon; and to Nahshon, Salmon; and to Salmon was born Boaz by Rahab . . .
Matthew 1:4-5

If we read quickly through Biblical genealogies, we’ll skip right over his name and assume “Salmon” always refers to a tasty fish. But there he is, mentioned two times (Luke’s narrative is the only other time Salmon pops up), and we never hear about him again.

But to us, Salmon should be both a hero and an example.

Salmon married Rahab. As in, the prostitute. The harlot. The woman of the evening.

C’mon, who marries someone like that? A hero, that’s who.

We know the story of Rahab, the harlot who hid Israel’s spies before the Battle of Jericho. She and her family were the only ones spared when Joshua and his army poured into Jericho in one of Israel’s first—and biggest—conquests.

Salmon is what happened next. He’s not mentioned in the Book of Joshua, however. Or, anywhere else in the Old Testament. It is only when Matthew and Luke put forth Jesus’ genealogical line that we see this man, the one who married Rahab.

We know nothing about him, Biblically speaking. But we know enough. For instance, we know he had the courage to accept someone outside of the Hebrew people. He not only accepted Rahab as one of his own, he married her. That’s a big step of faith.

And, we also know he married Rahab based on her present, not her past. Rahab’s past was, in short, a mess. What man wants to marry someone who has been with multiples of men—for money? Not only this, but everyone in the Israelite community knew it. No doubt, word got passed around about where the spies stayed during their visit. Of all things, they probably said, the only place they could find to hide out . . . was a prostitute’s lair! By the way, some scholars say Salmon was one of the spies. One day, perhaps we’ll find out.

But yes, everyone knew. And let’s not assume the children of Israel were super-human with their outreach and kindness to others. Like all of us, they had their failings. And if we think all of them surrounded Rahab with nothing but love, devoid of judgment, c’mon. Let’s be real.

Salmon however, did. Whatever was said behind his back, he chose Rahab. They gave us Boaz.

And Boaz? He married another outsider, Ruth. Which, according to Matthew, brought us to David . . . and Jesus.

Salmon saw a hero in Rahab, but he is a hero to us as well. Because his marrying Rahab led to our savior.

And, Salmon is an example we can all emulate. He didn’t focus on Rahab’s past, but on her present. When we see people—anyone—as Salmon saw Rahab, we do well. Because, many of those who come to our doors are begging to rid themselves of their past so they can have a better present.

Let’s choose to see with the eyes of Salmon. When we do, we may be better equipped to change the lives of those who need us most.