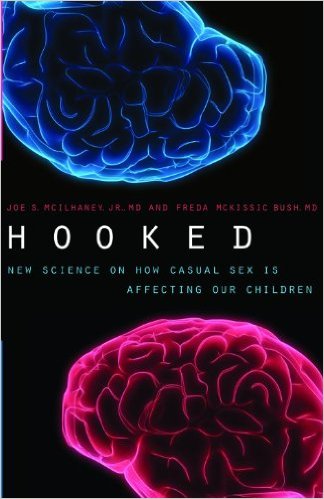 Who of us has not heard these comments when addressing the subject of delaying sex until marriage with teens and adults alike...“You just don’t want me to have any fun!” “Everyone is doing it!” “We love each other so what does it matter if we’re married?”

Hooked is a must read for pregnancy help ministry staff, parents, those mentoring teens or young adults – truly for anyone interested in how our bodies were created by God to biologically form lasting, meaningful connections with each other.

Packed full of eye-opening, useful information, Hooked lays out, in easy to understand language, the recent research in the field of neuroscience confirming the adage that our brains are the largest and most important sex/relationship organ humans have.

Because of new state-of-the-art technology, some startling discoveries have been made. We have known for a while the bonding effects that oxytocin has in a woman’s brain when it is released during sex but did you know that men release vasopressin which has a very similar bonding effect in a man’s brain?

Scientists are now able to measure when and how much of specific chemicals are released and the corresponding changes the human brain experiences when we engage in sexual activity.

One of the most important discoveries talked about in Hooked is crucial information needed for a culture so accepting of casual sex, “...there is evidence that when [the] sex/bonding/breaking-up cycle is repeated a few or many times – even when the bonding was short-lived – damage is done to the important, built-in ability to develop significant and meaningful connection to other human beings.” (Pg. 55)

As I read Hooked, Psalms 139:13-14 kept coming to mind – “For it was You who created my inward parts; You knit me together in my mother’s womb. I will praise You because I have been remarkably and wonderfully made. Your works are wonderful, and I know this very well.”

We are indeed “remarkably and wonderfully made!” It is always exciting to see science corroborate what the Bible has always said – that sex is meant to be enjoyed to the fullest within the context of marriage between one man and one woman.

**One of the authors, Freda McKissic Bush, MD is a member of the Heartbeat International Medical Advisory Council, frequent presenter at the Heartbeat Annual Conference, Medical Director for Center for Pregnancy Choices in Mississippi and CEO of the Medical Institute for Sexual Health among many other activities and accomplishments.

More in this category: « Appreciating the Nurse God Created You to Be 2017 Ultrasound Training at Pregnancy Help Institute a Huge Success »
back to top