The Year of the Fifty 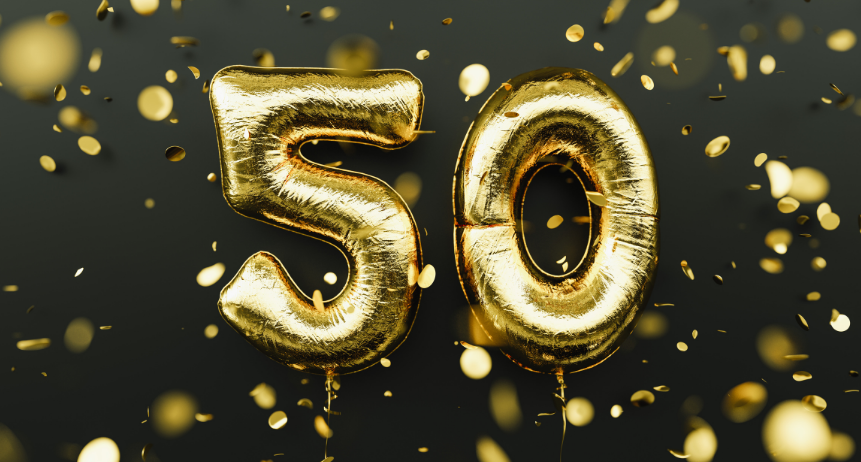 There’s something about 50-year anniversaries that always intrigues me. For one thing, I always seem to be ending up at these half-century landmarks whenever they happen. Whether it’s at my university, in my country of choice for an extensive study abroad, or during the timing of my first full-time job, I find myself celebrating 50 years of something… over and over. I’m starting to wonder, “Does God have something to tell me through all this? Are 50-year anniversaries significant to Him, and if they are, why?”

I started studying where the number 50 shows up in the Bible to search for clues. The first factoid I found was that “Pentecost” means “50” and was a feast that happened 50 days after the Passover celebration of freedom from Egypt. This feast of Pentecost was also called the Feast of Firstfruits and celebrated the harvest God had provided for the people. So evidently “50” was related to freedom, celebration, and abundance in that case. The number “50” also came up in situations involving armies (like a group of 50 soldiers) or measurements (such as “make this area of the temple 50 by 50”). But what really caught my attention was the significance of the Year of Jubilee, which happened every 50 years for the children of Israel and was an entire year of releasing slaves to their families, forgiving debts owed to debtors, and restoring land to its rightful owners. I felt I’d hit the proverbial jackpot. Here was an example in the Bible of a year-long celebration of a 50-year anniversary that God Himself ordained. Maybe here was the answer to my questions about “the year of the 50.”

Let’s take a look together at what God had to say to the children of Israel about this “jubilee year” in Leviticus 25.

First, God told them that every 50th year would be a year of rest – rest for the farmland and the vineyards. This directly followed another year of no crop-planting, as every seven years God commanded a Sabbath rest too. With the 50th year coming right after the 49th, the Israelites were eating what they had planted over 2 years ago. God promised to take care of them through this time and provide for all their needs through their previous harvest. When I read this, I immediately thought about how 2020 was a similar year of rest in many ways. Businesses were closed for several weeks, social events were cancelled or moved “to the comfort of your home.” We didn’t have the option to “plant” our normal seeds in the hearts of our donors and supporters. The pregnancy help movement largely had to depend upon past interactions and strong current supporters to get through this season, and God provided. (Interestingly enough, while we’re celebrating Heartbeat’s 50th birthday in 2021, the fiftieth year of Heartbeat International was 2020. Remember that a child’s first year occurs before their first birthday, and so on and so forth, so 2020 really did match up with our 50th year!)

Then God told His people to “proclaim liberty throughout the land to all its inhabitants” (v. 10). Slaves were freed and sent back to their hometowns, people who had sold their houses and land were welcome to return to their heritage (very important in those days), and many people got to experience freedom and release. It made me think of the fact that the pregnancy help community does exist to see an end to abortion in our lifetime, but in that existence, we encounter so much more than “the abortion problem.” We see broken families, wounded hearts, drug addiction, physical abuse, and sexual webs woven so tragically you wonder if their effects can ever be un-done. But Jesus came to give us “the year of the fifty.” He came to give not only us, but also our clients, a way out, a way to return to their homeland and repair the broken cities that have been devastated for generations. His power is real, and it works. What we do through pregnancy help inspires people to go back to their families – the places they learned their brokenness – and restore them back to healthy communities.

Last but not least, God promised the Israelites in verse 21, “I will command my blessing on you in the sixth year, so that it will produce a crop sufficient for three years,” speaking of His abundant provision to sustain His people through their 2-year season of rest. Because the provision of the 48th year was so great, God’s people survived and thrived until they could reap the harvest of the 51st year. We’re in that season of rest and provision, friends. The seeds you have sown in previous years are still alive in the hearts God destined for them to be placed in. And not only are those seeds planted in the hearts of your donors, but also in the hearts of your clients. You are a two-sided ministry. Don’t doubt that God will bring to fruition what He planted through you in what seems like the distant past. His seeds have a purpose, and He will accomplish what He has set out to do. Don’t worry about “letting the fields rest.” God saw ahead, and He has commanded His blessing on you.

Just a few more thoughts. As a twenty-something celebrating all these 50-year marks, I’ve realized that it’s so sacred to witness a 50th anniversary. Think about when a couple celebrates their 50th anniversary. It’s such a special celebration because they likely won’t get to celebrate another 50-year mark – their 100th anniversary. Many times, different generations are looking at the same fifty mark and only get to see that fifty mark once. In the same way, a 50th birthday for an organization is a moment that all share together. I get to celebrate what others gone before me have prayed for, wept over, and offered their lives in service to. Heartbeat International, and the pregnancy help movement in general, takes skills, viewpoints, and experience levels from various generations to bring true healing and help to our communities. We are a cross-generational movement, and our 50th birthday is a moment in time that captures our passion together. May this “year of the fifty” be a year of rest, release from bondage, abundant provision, and multi-generational celebration.

More in this category: « Keeping Essential Workers Up in Down Times Essential Narratives »
back to top