We All Need Some “Matthew” In Us 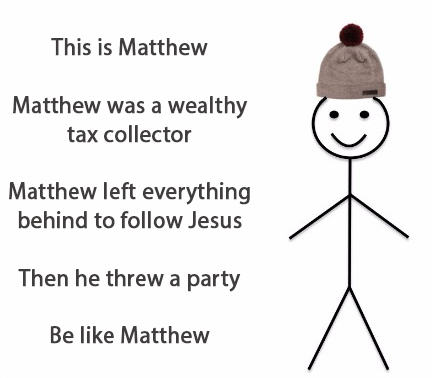 And after that, He went out, and noticed a tax-gatherer named Levi, sitting in the tax office, and he said to him, “Follow me.” And he left everything behind, and rose and began to follow him. - Luke 5:27-28

The calling of Matthew is as simple as it gets. In Luke’s account, Jesus is only passing by Matthew’s office when he says, “Follow me.” That’s it. From there, Matthew hops up and follows. Easy, right?

But wait a minute. Why did Matthew follow? No one this side of Heaven knows for sure.

We know only one piece of information on Matthew, that he was a tax collector. On the plus side, tax collecting was lucrative work, because tax gatherers like Matthew normally extracted more from the taxpayer than the owed amount. They kept the extra drachmas and denarii for themselves. This practice didn’t win friendships, but it certainly paid the bills.

The downside? Matthew was a Jewish man working on behalf of the tyrannical Roman government. To the Jews then, Matthew was a traitor. Because of this, many Jewish tax collectors of that day were banned from the synagogue.

Matthew’s relationship with the Romans wasn’t much better. To them, Matthew was like a loan shark’s enforcer, shaking down his fellow citizens to fund the Roman military and making sure the Roman hierarchy lived in luxury. While the Roman elite saw Matthew as somewhat useful, he would never be “one of them.”

In short, Matthew was a man without a people. He probably had few trusted friends, other than fellow tax collectors and those who hung out with him because of his money.

When Jesus stopped by his office, Matthew was probably in a quandary. On one hand, the weight of his job—and the derision he faced from his fellow Jews—was certainly a constant source of hurt and pain. On the other, tax collecting was a way to accumulate wealth. Leaving the profession was going to cost him.

What did Matthew know about the Jesus who stopped by his office? It’s hard to tell from the text, but maybe Matthew had heard stories of a miracle worker coming out of Galilee. Or, he might have picked up on news that this Jesus had harsh words for the Jewish religious leaders—the same people who likely abhorred Matthew.

Here are some things we do know about this encounter: Jesus didn’t ask Matthew to give up tax collecting. He didn’t upbraid Matthew for taking from his fellow Jews. Nor did Jesus go through a laundry list of items needing change in Matthew’s life.

Jesus only said, “Follow me.” Matthew’s decision was not an easy one. He was forced out of his comfort zone, where there was at least financial stability.

But Matthew did just that. Leaving everything behind, he walked out of his office, never looking back. Matthew would join the other disciples and go on to write the biography of Jesus which bears his name.

Matthew started his followership by throwing a party for Jesus, which makes me smile. Jesus thought it was a great idea. When Pharisees balked at this display of reverie, Jesus defended Matthew and His other followers—enraging the religious elite even more.

Today, no one knows the names of the Pharisees who verbally attacked Jesus. But almost anyone who has opened the most read book in history—the Bible—knows Matthew.

And Matthew’s journey began with a snap decision, giving up financial security for a new life with an unknown destination. All Matthew knew when starting this journey? He would be right behind Jesus. And that was enough.

Sometimes, Jesus calls us to journeys which can only begin if we leave something comfortable behind.  Taking the first step is perhaps awkward and yes, uncomfortable. But even when “follow me” may not make perfect sense, we can trust in the One we follow. And wherever He leads, like Matthew we can trust our destination will be both fulfilling, and life-changing beyond anything we can imagine.

More in this category: « The Right Heart Leads to The Next Step Jesus and a Common-Sense Approach to Racial Reconciliation »
back to top