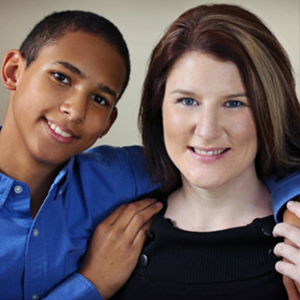 At seventeen and a half I joined the Military and started to get a little taste of freedom.  I was sent to training with the North Carolina National Guard, when I fell in love with my now husband of twelve years. He was in the Navy and left to be stationed in California. You’re now saying, “How is that a great testimony, and how does the second chance come into play?”  The guy I fell in love with was not the guy my parents wanted for me. Why not? Let me tell you.  Biracial relationships were not allowed in the family - period.

So when I came home from training, I had to make a choice - my family or my African American boyfriend. I choose my family. Months later I turned eighteen and made a choice to move out of my family’s home which gave me more freedom to do what I wanted to do. I started to drink underage, do drugs, and party. I also still had feelings for my boyfriend that I was told I could not be with. We reconnected and fell in love again with a long distance relationship. I was headed down a path that was not pleasing to God, or my family, and was very empty.

The life I was now living included drinking, drugs and non-marital sex which kept me from facing reality and I thought I “had it all.” I lived by myself, paid my own bills and had a great relationship with my family. I was also able to have a relationship with my boyfriend without my parents knowing. Well, that was until my boyfriend came for a visit for a week or so. One night we went to a club with his friends and mine and were drinking a lot.  That night changed my life forever. Yes, that was the night I conceived my son Derrick. I found out about four to five weeks into the pregnancy but I continued to live the same lifestyle.

I was running scared. I was scared that I would lose my family and scared that my boyfriend would leave me. I mean, why would he care?  We only talked on the phone and saw each other a few days out of the year. Now at the age of twenty, I found myself pregnant, scared and alone. How can I keep it all? I loved my boyfriend and my family at the same time. I did not want to lose any of them. The only person that knew was my best friend. In my mind I was trying to come up with a fix. I had two options- keep the baby and lose my family and boyfriend, or abort and no one had to know. I could go on with my life and still be loved by all.

One day I found out about LifeLine Pregnancy Help Center.  I did not know too much about it, but knew it had “help” in its name. I walked into the doors and that is where the love begins. They talked to me and I felt cared for. My heart changed when she (my client advocate) handed me a tiny silicone baby in my hand. I held it and studied it; I still remember her saying “this is how big your baby is.” I questioned “How? I’m just a few weeks pregnant” - but it was true. My baby had a heartbeat. He had my DNA. He was a boy, and had hands and feet. My mind changed in a matter of an hour; I could not ever hurt my child. I choose to tell Raymond, the father. It went better than what I thought it would. He was so happy he was going to be a dad!

I chose to hide my pregnancy from my family, but they found out and disowned me and my unborn child. The pain I felt was real, it hurt, but I loved them so much and wanted them to be a part of their grandchild’s life. That did not happen. I had to do this by myself, with a long distance relationship with the father.  That is where Life Line Pregnancy Help Center stepped in. I started taking classes and watching videos on how the pregnancy was going and how to take care of a baby. They provided me an option to “earn while I learned.” At six months into my pregnancy, my appendix ruptured and my son’s life and mine were in great danger. I fought hard and gave up everything to keep my son and there was no way I was giving up now. Going through this and being in the hospital for weeks made me question myself again. I had no family to help out if something was to happen to me. I fought and pulled through and my son defied all odds and made it too.

I gave birth to my son on June 10, 2001. He was so cute!  That day I found a love that I had never found before. I would give up everything all over again for him. When my son was a few weeks old, I made a choice not to return to work and move to Gulfport, MS with his dad. His father’s face lit up the moment that he met his son for the first time. On March 1, 2002, when Derrick was only nine months old, Raymond and I were married. Being married to someone in the military is a job of its own - moving a lot of times to many different states. In 2003, I got the unexpected news of my grandmothers passing. I was not sure how to attend the funeral, and not upset my parents by attending. To my surprise, my father pulled me aside in front of my husband and child and wanted to mend the relationship. That was the second best day of my life. He was able to see and talk to his grandson and son-in-law.

On May 13, 2004, we brought a beautiful daughter named Hailey into this world. While being focused on being a good mother to my children, going on with my life and just living day to day, I did not put my trust in God. I finally realized it made my life a lot easier when I put my faith in God and allowed him to take control of my family’s lives. To the present day I am thankful for God, LifeLine Pregnancy Help Center  staff, and family for supporting me and never giving up. I believe my experiences in life have played a sufficient role in helping other expecting mothers with their labor and delivery. I currently am working as a Doula in my community.  May God’s love shine through me and play a sufficient role in their lives.